This Bacon, Spinach Caramelized Onion Pasta is an easy to prepare dish that can be made in one skillet once the pasta is boiled and drained. The flavor pairings of the savory bacon, caramelized onion, and spinach complement this dinner dish.

A few weeks ago many of you know I was able to place my first order with Terra’s Kitchen. I was super impressed with their food meal prep delivery service and was able to make several tasty recipes using their premium cuts of meats, and foods.

Two of my favorite products they sent was the Whole Wheat Penne Pasta and the Applewood Bacon. These two deliciously fresh ingredients inspired this spin off recipe from their original which features kale.

Since we love pasta so much in this house, I make it more frequently in the cooler months. I love the versatility of it, and how it is a perfect way to extend a meal to cater to more people, and servings.

I often find myself adding smaller portions of leftover meats to pasta dish to not only use them up, but create heartier dishes.

That is why this Bacon, Spinach Caramelized Onion Pasta is ideal for those last few ounces of bacon you might have leftover.

After making this Bacon, Spinach Caramelized Onion Pasta I knew I had a keeper. The recipe was so delicious that even the three picky kids wanted seconds (a rarity around here).

The only problem is, I made a small batch and will have to possibly double the batch the next time around. Also, keep in mind that the original recipe inspiration from Terra’s Kitchen calls for kale so that can also be used if you have extra hanging around or prefer that over spinach.

How to Get Flavorful Pasta

The beauty of this dish is once the pasta is boiled and just about all the water is drained, you add it to the skillet which will already have some juices from the bacon and onion.

This is the “sauce” to this pasta and is so tasty and delicious. It was great to try a pasta dish that featured a light sauce that was something other than a traditional marinara. The Parmesan cheese ties the flavors in so well and is the perfect topping to this dish. 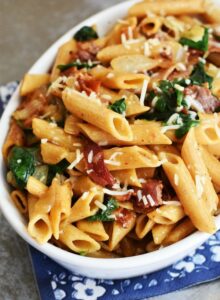