Leftover Chicken, Spinach, and Tomato Pasta is a great way to use up small amounts of cooked chicken. Use rotisserie, grilled, baked or even boiled chicken in this easy pasta dinner recipe.

I don’t know about you, but the holiday crunch is really catching up to me. Endless work days, untouched gift lists, cards to make, and people to meet. Things are getting to be really crazy in our house. Sometimes, I turn to take out if I need a fast meal for my family in a pinch, but it is not my first choice.

I always try to keep pantry staples like pasta, olive oil, and Hunt’s Diced tomatoes on hand for days when I need to throw together a quick meal that tastes good.

Bet you didn’t know I am a professional at winging dinner! Despite not always have a ton of time, I can usually whip up something flavor-loaded with ingredients I have on-hand.

Ever take the refrigerator challenge where you try to use up foods and leftovers you have on hand? Well, this recipe was inspired by that, but turned out to be a winner! It is perfect for a quick holiday meal before the real festivities get here!

After surveying my fridge, I realized I had so many onions, a heaping portion of spinach, cherry tomatoes, and leftover chicken tenders I needed to use up quickly that were about to go spoiled. There was also that box of angel hair pasta I had only used a little out of- hate when that happens.

So I decided to freeze my buns off and grill the chicken outdoors. Why I did that- I have no idea. I could have easily pan-fried it in the house, and YOU can too. Feel free to prep your chicken, however, you would like for this.

To beef up this recipe, and the mere cup of cherry tomatoes I had on-hand, I grabbed a can of Hunt’s Diced Tomatoes out of the pantry. These tomatoes are my favorite because they are FlashSteamed®, all natural, and the can contains zero BPA. They also taste pretty much just like freshly diced tomatoes which is awesome.

The chunky “sauce” recipe was pretty much made in the skillet where all the magic happens.

I started out by adding 2 tablespoons of olive oil to my skillet over medium heat.

Then came the onion and garlic- so fragrant. About 3 mins later, the cherry tomatoes were added, and then the Hunt’s Diced Tomatoes. I added about 1/2 tablespoon of freeze dried basil and some black pepper. Once the tomatoes burst open, I increased the heat to remove some of the excess moisture.

Then, I added a package of Lipton Mushroom Secrets to the pan along with the spinach. I sauteed in for about 3 minutes on lower heat and added the pre-grilled chicken chunks. I allowed it to simmer on low for another couple of minutes before topping off some angel hair pasta with it.

Let me just say this is one creation you will love! It tasted fresh, and was jam-packed with flavor.

Refrigerate leftover challenge for the win!

The best part is, you totally can recreate this recipe at home without having to scrape together leftovers! 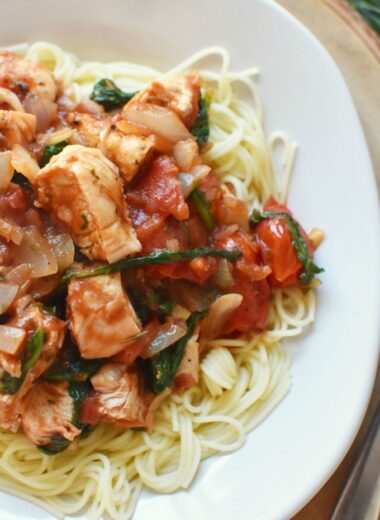 Nutritional values are meant to be a guide and may differ. This meal keeps in the fridge for up to 3 days for best taste.